OTTAWA – A person’s age is closely related to the goods they consume and the services they need. For example, a young adult may be thinking about buying their first home or purchasing goods and services to meet the needs of their young family, such as daycare. An older, retired person may seek out other goods and services, such as those related to recreation and health, and may even buy a smaller home or a car after their children have moved out.

A population has different needs depending on whether its age structure is younger or older, and changes to this structure can have significant effects on the economy and society as a whole. For many decades Canada’s population has been aging; the number and proportion of older adults has been rising continuously. Population aging shifts the balance of services needed in some areas of the country and puts additional pressure on a number of sectors, including health care and labour.

Population aging is not new, but other changes to the age structure are more recent, such as a decrease in the number of very young children due to declining fertility since 2016. Furthermore, the COVID-19 pandemic has affected population age groups differently. For example, youth aged 15 to 24 saw a bigger decline in mental health, while older seniors were affected to a greater extent by excess mortality related to COVID-19.

Today, Statistics Canada is releasing a second series of results from the 2021 Census which features the age structure of the Canadian population and the types of dwelling in which Canadians live.

The working-age population, persons aged 15 to 64 who produce the bulk of goods and services in the Canadian economy, has reached a turning point. Never before has the number of people nearing retirement been so high. More than 1 in 5 (21.8%) persons of working age are aged 55 to 64. This is an all-time high in the history of Canadian censuses and one of the factors behind the labour shortages facing some industries across the country. The aging of many baby boom cohorts—the youngest of whom are between 56 and 64 years today—is accelerating population aging in general.

In the coming months, Statistics Canada will release more results from the 2021 Census, which will provide a comprehensive statistical portrait of Canadian communities from coast to coast to coast.

You can read the whole report here. 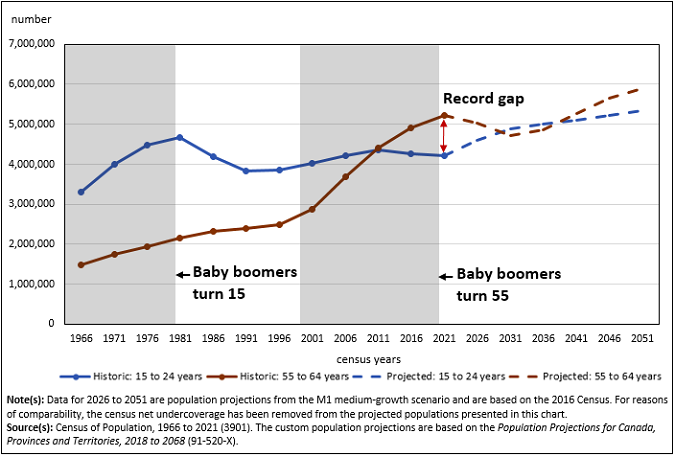